Marshmallow Fluff Never-Fail Fudge has always been a hit in my home. It probably helps that Marshmallow Fluff is a New England tradition that my mom, born in the southern Boston area, carried into my family’s Florida home. (And I’m so thankful!)

Have no idea what all the fuss over Marshmallow Fluff is?

Well, before I start sharing my favorite fudge recipe, let’s take a trip to New England and see what makes this wicked good marshmallow cream so, well… wicked good!

Nuthin’ But The Fluff

But what makes Marshmallow Fluff stand a puff above the other marshmallow creams you’ll probably find in your local grocer’s sugar aisle?

Durkee-Mower says they use a “batch-whipping process,” which they claim is the only marshmallow cream still made that way. Batch-whipping makes a smooth, fluffy product that is as fun to look at as it is to eat.

Fellow natural-foods fans like me will also be glad to know Marshmallow Fluff contains no artificial preservatives.

I don’t consider myself a chef by any stretch of the imagination, but I can tell you that Never-Fail Fudge is about as easy to make as its name would suggest.

Almost as easy, that is!

You see, I’ve made a few blunders over the years making Fluff Never-Fail Fudge. I blame it not on the fudge recipe but rather on my being loosey-goosey with the preparation process.

The Fluff fudge recipe is really simple, and it requires a short list of ingredients — many of which you probably already have in your kitchen. 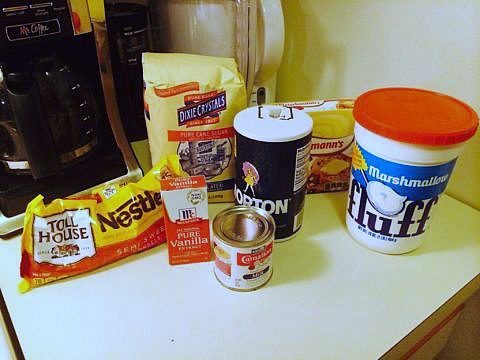 Here’s what you’ll need to make a tasty batch of Never-Fail Fudge:

The first 5 ingredients should be combined into a large pot (I use a 3-quart pot) over low heat. Stir the contents until everything is well blended, and then turn the heat up to moderate, letting the blend boil for about 5 minutes. Candy experts would tell you to let the fudge mixture get to soft ball stage, but at this point I’m not that culinarily attuned!

Once the mixture has boiled for 5 minutes, remove the fudge mix from the heat and immediately add the vanilla, chocolate bits, and chopped walnuts (or other tasty modifications if applicable), blending everything thoroughly. Let the fudge cool in the pan for at least 2 hours (or 45 minutes to 1 hour in the refrigerator).

Cut into slices, and enjoy!

I’ve made Never-Fail Fudge so many times now that I’ve also stumbled over making the fudge more than once, too. Here are 4 personal tips that I’ve learned from trial and error: