Crock Pot vs Oven: Does Crockpot Cooking Save You Money? I love being able to throw all the ingredients for a soup or a roast in my crockpot and then just turn it on and go write! I don’t always have time to cook — especially when I’m working on a deadline — so using my crockpot can be a super time saver for me.

Another nice thing: using a crockpot preserves a lot more of the minerals and vitamins in vegetables when you cook them. So, crockpot cooking is healthier as well.

But the question of the day is: Does crockpot cooking save you money?

The answer is a little complicated.

It depends on where you live, and the kind of power you use for your home, believe it or not.

For example, if you use gas to cook with, then cooking with a crockpot may not make much of a difference, since in many cases gas is quite inexpensive. However, if you use an electric oven, then a crockpot could save you quite a bit.

If You Live In The Pacific Northwest… 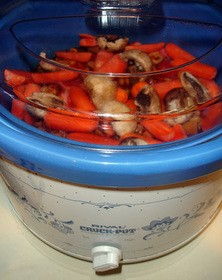 If you use electricity to cook, and you live in an area where electricity rates are a bit better than some other parts of the country (like Seattle, where I live), it only costs $0.10 to run a crockpot for 8 hours.

It only costs between 10-cents and 25-cents to run your crock pot for a full 8 hours! Source

That’s no surprise considering that it only takes about 200 watts to run a crockpot. However, it takes approximately 2900 watts to run your electric oven. And you know that the more wattage your appliance uses the higher your electric bill is going to be. So, for people like myself who live in the Pacific Northwest, using a crockpot definitely does save us money.

If You Live On The East Coast… 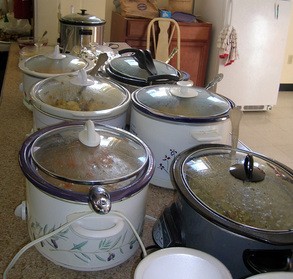 So, what if you live somewhere like the East Coast, for example, where electricity rates are very high? Will you still save money if you use a crockpot, as opposed to your electric oven?

Let’s say for the sake of an example that where you live your electric company charges 8.2 cents per kWh and your electric oven uses 2900 watts, then it costs approximately 16 cents to run your oven for one hour.

Since most people run their ovens for about 30 hours a month, then the power cost to run your oven for one month is only about $4.80. That’s not too bad, and that’s with a higher rate per kWh.

Since most crockpots only use about 200 watts, then even at this higher rate you would only be spending about 2 cents per hour to run your crockpot. So, if you run your crockpot for 8 hours to cook a meal, then this is only going to cost you 16 cents per 8 hours.

There are, of course, other factors to consider. Maybe your crockpot meals only take 4 or 6 hours to cook, then the cost to run the crockpot monthly would go down.

Or, maybe your electricity rates are lower. Or, maybe you use gas to cook and heat your home.

These other factors can all play into the answer to the question of whether or not it is actually cheaper in terms of energy efficiency to use a crockpot vs a conventional oven.

According To The Experts…

Following are some interesting facts and figures I’ve found regarding the energy savings associated with using crockpots. These quotes (many of which are based on statistics from local power companies) may also help to explain some of the confusion with regard to exactly how much money — and energy — you save when using a crock pot:

Crockpots, particularly today’s models, are energy-sippers compared to most other cooking methods like a traditional oven, stovetop, or toaster oven. Slow cookers use just 100 watts of electricity, which means that if you use it once a week for 8 hours at a time, it’ll only cost you about TWENTY CENTS a month in electricity! Source

If you are concerned about the amount of energy consumed by using a crockpot (which is a very valid concern!) here is a pamphlet put out by First Energy Corp. in Ohio. The chart on page 5 says that a crockpot uses $0.02 power per hour. Here’s another energy usage list put out by the Northeast Utilities System that says the monthly cost of using a slow cooker is $1.17. Source

Typically, I simmer a beef stew on my gas stove for at least 3 hours. I calculated with my handy electrical usage meter that this requires about $1 worth of electricity. Running my electric slow cooker for the 8 hours it took to make a stew cost only 20 cents! So, I saved 80 cents and if I did this once a week all year long I could pocket close to $50!  Source

According to this guide published by Seattle Light, it costs about 10 cents to run a crock pot for 8 hours, whereas it costs 32 cents to run your oven for an hour. Source

A power corporation in New Zealand has a chart of appliances and the power they use. According to their chart a crock pot has a wattage of approximately 220 while both an electric oven and stove have a wattage of 3,000. Source

And finally, as mentioned in this video, “to cook a meal in a crockpot over a 12 hour period it costs $2!” 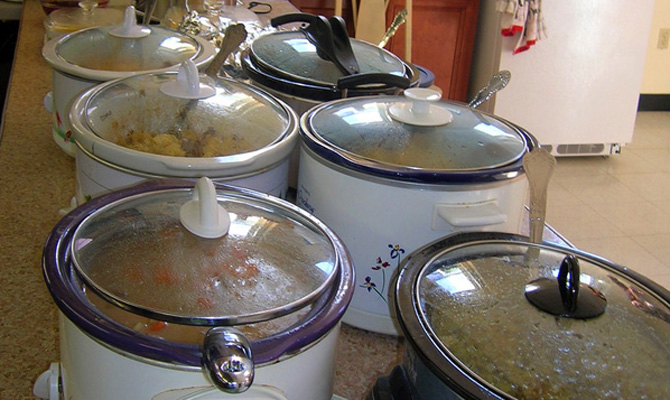